What Are You Waiting For?

It's another weighty Christmastime, marked not only with the challenges of a chronic illness, but in the past week, two people in our congregation, of relatively young age, have passed away.  We are glad for them to be translated to glory, but grieve with the families~

Too, I've been in contact with a number of Lyme-fighting buddies through various social media networks- and my heart goes out to those who are fully in the throes of this dread illness... Last week I celebrated with another young friend who is battling glioblastoma multiforme (a rare, aggressive brain cancer) as he had gotten a positive result from his latest tests; although there is a shadow of being cautioned that he must be tested every two months to make sure to keep a close eye on his progress.

And, my dear grand-niece continues to battle ALL; she is now about nine-months old and has gone through more treatment **** than I can even begin to fathom- but happy to be able to be home for a few days with her family, pictures of her smiling give testimony to her strength, joy, and the great care and love she receives from her young parents... 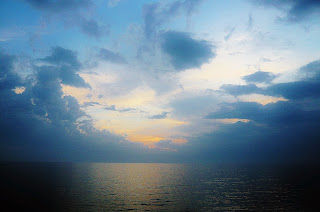 Storms.  Evil and Good in tension with one another.  While on earth- we cannot escape being touched by evil/sin that is in the world.. BUT-

New American Standard Bible (NASB)
3 and every spirit that does not confess Jesus is not from God; this is the spirit of the antichrist, of which you have heard that it is coming, and now it is already in the world. 4 You are from God, little children, and have overcome them; because greater is He who is in you than he who is in the world. 5 They are from the world; therefore they speak as from the world, and the world listens to them.


We all find ourselves in storms from time to time...sometimes for extended amounts of time, with great distress... But just as when Jesus was with His disciples in the boat, with the storm raging...  He (Jesus) went out INTO the storm WITH His people.  He is with you.  He is your Hope.  He is willing to suffer with us.

New American Standard Bible (NASB)
23 But as they were sailing along He fell asleep; and a fierce gale of wind descended on the lake, and they began to be swamped and to be in danger. 24 They came to Jesus and woke Him up, saying, “Master, Master, we are perishing!” And He got up and rebuked the wind and the surging waves, and they stopped, and [a]it became calm. 25 And He said to them, “Where is your faith?” They were fearful and amazed, saying to one another, “Who then is this, that He commands even the winds and the water, and they obey Him?”

Who then is this?  Who is this that calms the storms?
We are in Advent-  we are waiting... Waiting for the One Who Was, Who Is, and Is To Come.

We remember Him through the Ancient Words, through remembering how He has been with us already; we remember He Is with us now; and we look forward to His coming again- to set things right!  Our focus must be on Him~ and our hope set on Him...

If you are in the middle of a storm(s) right now-  Please take time to listen to this free podcast by Louie Giglio-  I hope it will encourage you as much as it has encouraged me~   Listen to the December 10, 2013 "Seeing Christ in the Storms of Life" message http://podbay.fm/show/400379025

Blessings-  and MERRY CHRISTMAS~
Posted by Cynthia Dainsberg, RN, FCN at 11:43 AM